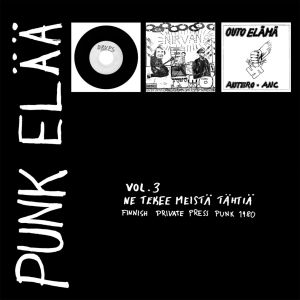 he aim of the Punk elää 7″ box series is to offer people the chance to digest these often impossibly rare and expensive records in their original 7 inch format. Each box comes with an insert with text from Fenno-punk historian Juho Hänninen.

BRUPS started in Vaasa in the late 1970’s. The band occasionally played shows around Vaasa area, and even performed their song ‘Rampton’ on national television. The lead singer moved to Sweden in 1982, and eventually the band split up. BRUPS returned in 2000 with a new lineup, but this highly sought after single is the only thing they originally released in 1980.

NIRVANA started in Ruovesi in 1976. In their early days the band mostly played cover songs, and performed live in Ruovesi and surrounding cities. In 1980 the self-released singles from Finnish punk & new wave bands inspired Nirvana to make their own record, which is included in this box set. The B-side of the original single is very distorted, which was caused either by a damaged master tape or a mistake at the pressing plant. This reissue has been carefully restored and remastered to make the B-side sound as good as possible.

OUTO ELÄMÄ was formed in Joensuu in 1979. The band was very active in the local scene and played dozens of shows in their first six months. Eventually they recorded a demo at their friends’ rehearsal place with the intention of getting a proper record deal. Unfortunately the band were left unsigned, and the complete demo wasn’t released until 1998, but the band self-released two of the tracks as a 7″ single, which has become a highly sought after collectors item and now sells for ridiculous prices.