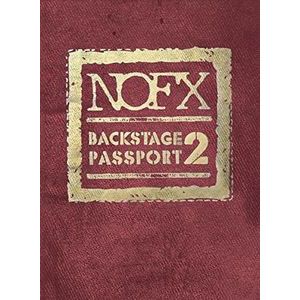 In 2008 punk veterans NOFX released an 8-part TV docu-series called NOFX: Backstage Passport, which followed the band's ill-fated attempts to take punk rock to the unconquered corners of the globe. The mayhem that ensued was a mix of hilarious moments and crazy snafus that resulted in some shows on the tour being cancelled. Over the following four years NOFX set out to make up several shows in Mexico, Peru and Colombia that got derailed on their first attempt. Not surprisingly there were just as many bumps in the road this time around: inner-band meltdowns, shady promoters, tear gas, fires, drugs, an 8.8 earthquake and, of course, riot cops. Once again the cameras were there to capture every inglorious moment and it's all available for your viewing pleasure as part of Backstage Passport 2. In addition to the feature-length documentary, the two disc set contains two "lost episodes" (Australia and Eastern Europe) from the original Backstage Passport series and loads of unreleased bonus footage. Backstage Passport 2 is your ticket to accompany NOFX on more berserk international adventures, done as only they can.