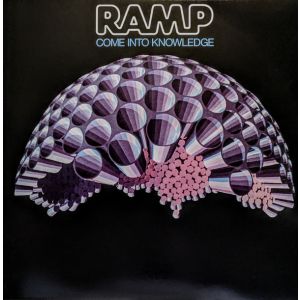 Vinyl LP pressing. 1977 album by RAMP (Roy Ayers Music Productions), a soul/jazz band from Cincinnati, Ohio. It was founded in 1976 by Roy Ayers, who was not a member of the group, though he did write and produce songs on their only album. The band consisted of Sharon Matthews and Sibel Thrasher on vocals, Landy Shores on guitar, Nate White on bass, and John Manuel on drums and percussion. The group released this one studio album, Come Into Knowledge, subsequently considered a classic among rare-groove collectors, artists and Roy Ayers fans. Come Into Knowledge was recorded at Electric Lady Studios in New York City and at Record Plant in Hollywood, California.