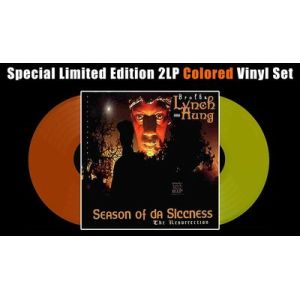 Double orange and yellow colored vinyl LP pressing in gatefold jacket. Digitally remastered by Grammy Award winner, Brad Blackwood. Brotha Lynch Hung (Kevin Mann) recorded and mixed Season Of Da Siccness album in 1994. It was released in 1995. The album is dedicated to the rapper Q-Ball, Mann's cousin who was murdered around the time of the album's creation. The song 'Liquor Sicc' touches on subjects of dealing with his death and retaliation. Personnel on the album include Brotha Lynch Hung, Mr. Doctor, Ron Foster, X-Raided, Zigg Zagg, Zoe, Sicx, Hyst, and Babe Reg. Mann has stated that he produced, mixed and mastered the entire album himself, which to this day is the only album in which he has done this.