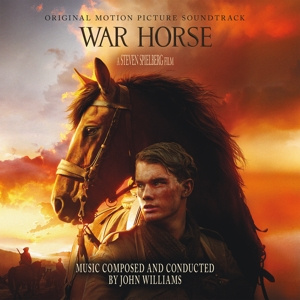 War Horse is a 2011 American war film directed and produced by Steven Spielberg. It is set before and during World War I, and tells the story of a bay thoroughbred horse that was raised by a teenager and eventually gets bought by the British Army. The film became a box office success and was met with positive reviews from critics. Its soundtrack was composed by Spielbergs frequent collaborator John Williams, the legendary composer known for his works for films like Star Wars, Harry Potter, Jaws, E.T. and Jurassic Park. Many of the award nominations the film received were for Williams’ soundtrack. It is now available on vinyl for the first time, as a 10th anniversary edition of 500 numbered copies on silver bullet vinyl.