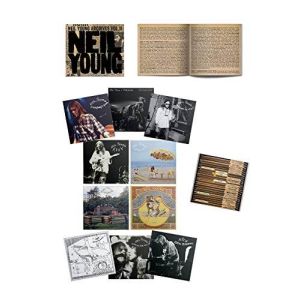 New versions and previously unreleased tracks across this huge collection of beautifully presented archival recordings of one of the most illustrative artists of the 20th Century.
This is the second volume of the Neil Young Archives series of box sets produced by Neil Young. A definitive, comprehensive, chronological record of his entire body of released work.

This box set covers the extremely productive period from 1972 through 1976. A prolific era for Neil when he released several classic albums including On The Beach, Tonight’s The Night and Zuma. Homegrown, just released, is part of this history as well. The box set features a total of 131 tracks of which 62 are either unreleased songs or unreleased alternate versions, different mixes, rare or live tracks.

This version of the box set includes 10 CDs and oversized fold-out Archives Poster, plus a 24-page booklet and is packaged in a cube-shaped slip-case box.

The 10 CDs, each in its own custom sleeve feature tracks from Neil Young solo, plus with bands Crazy Horse, The Stray Gators, The Santa Monica Flyers, the Stills/Young Band and Crosby, Stills, Nash & Young.