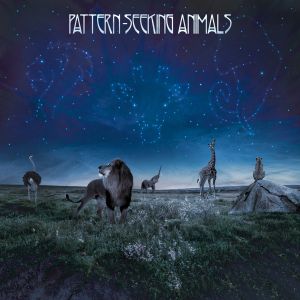 PATTERN-SEEKING ANIMALS is the quartet featuring the talents of current & former Spock's Beard members Ted Leonard, Jimmy Keegan & Dave Meros as well as long-time contributing songwriter-producer John Boegehold. Boegehold comments: “My goal was to produce music that’s progressive and intricate while keeping things immediate and melodic. Whether a song is four minutes or ten minutes long, I didn’t want more than a few bars go by without some kind of instrumental or vocal hook.” With the band obviously being closely associated with Spock’s Beard, John was conscious of exploring different avenues with Pattern-Seeking Animals, whether it was song structures, vocal arrangements, synth sounds or emotional textures. “Pattern-Seeking Animals was a clean slate so I found myself drawing on a few different musical influences and using some contemporary production ideas and sounds that I probably wouldn’t use with SB for various reasons.” Originally, planned as a recording project, P-S A will also perform live!
1. No Burden Left To Carry
2. The Same Mistakes Again
3. Orphans of the Universe
4. No One Ever Died and Made Me King
5. Fall Away
6. These Are My Things
7. We Write the Ghost Stories
8. No Land's Man
9. Stars Along the Way