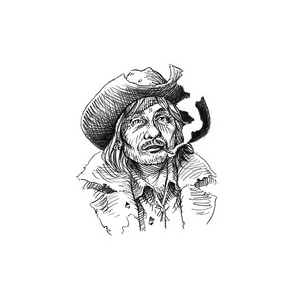 Arguably the most prolific working rock band in the world, Circle has even managed to make Guided by Voices look like slackers. Forming in 1991, the band has released over 30 studio albums, 15 live albums, and an additional double-digits of single, EP, and compilation appearances. Along the way, they have collaborated with unpredictable partners, from Seattle-area sound-art project Mamiffer, German innovators Faust, and Damo Suzuki of Can fame.

One alliance has been with Californian musician Bruce Duff. Duff has played with many U.S. alt/punk bands, but it was his work with Jesters of Destiny that endeared him to Jussi Lehtisalo, Circle’s bassist and also the man behind their inexhaustible label, Ektro Records. The Jesters’ LP Fun at the Funeral had been a Jussi favorite from his days growing up in Pori, Finland, the band’s home. In 2001, Jussi tracked down Duff via the miracle of the internet, and arranged to reissue FATF on CD for the first time.

Before long, Jussi introduced Duff to all things Circle and Pharaoh Overlord (a Circle offshoot that’s released another 15 or 20 albums). DVDs of files began to cross the continents and oceans, and by 2006, Duff had guested on a single and then Circle’s Earthworm EP. Both Circle and the Jesters are bands to whom genres and stylistic restrictions are considerations to be ignored.

Not content to leave well-enough alone, Circle with Duff onboard carried on and, within two years, had completed Hollywood. For the punk-damaged American, never had he assembled songs over structures so stretched or outright eliminated. For the Finns, never had their repetitions been divided into sections and then sung in English. The result was new for both participants.

Hollywood’s “Sacrifice” is most straight-ahead, un-apologetic classic metal that anyone involved had ever done. The icy repetition of “Spam Folder” was fleshed out lyrically by using the Burroughs’ cut-up technique on Duff’s email junk folder. Half of the hour-long work was devoted to “Requiem in D Minor,” with three distinct but related movements fleshed out with a contemporary libretto ruminating on loss and death. Prog or put-on? It’s Circle with a Jester - does it matter?

Circle on Hollywood is: