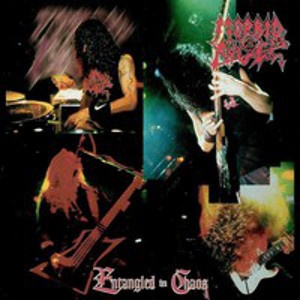 1.Immortal Rites
2.Blasphemy Of The Holy Ghost
3.Sworn To The Black
4.Lord Of All Fevers and Plague
5.Blessed Are The Sick
6.Day Of Suffering
7.Chapel Of Ghouls
8.Maze Of Torment
9.Rapture
10.Blood On My Hands
11.Dominate

FIRST TIME ON VINYL for this iconic Morbid Angel live album Originally released in 1996, ‘Entangled In Chaos’ was recorded during the ‘Domination’ album touring cycle in 1995/1996.‘Entangled in Chaos’ was the first official live album from Florida’s legendary Death Metallers. At the time MORBID ANGEL had once again placed itself at the forefront of the extreme metal community with this incredibly powerful live album. Morbid Angel are widely recognised as pioneers of the Death Metal genre whilst also enjoying commercial success with over 2 millions albums